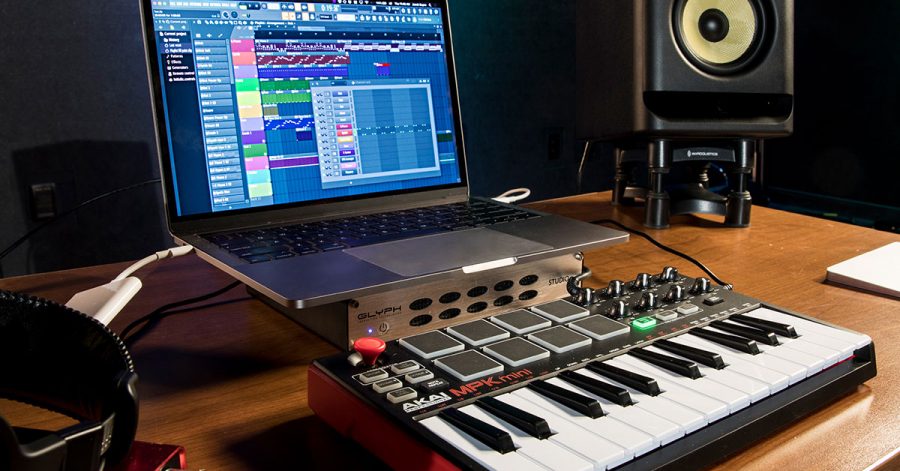 Many Homestead students are involved in an activity that is based around music. Whether that be show choir, orchestra, marching band or jazz band, there are several opportunities for students to display their talents. Some have even ventured into making and releasing music on their own.

Kyron Gilbert, 12, has been making music since eighth grade, but started taking it more seriously a couple of years ago in 2018.

What many people don’t know, however, is how time consuming the music making process can be. The artist has to make their beats and write the lyrics from scratch. It can be difficult to come up with something that hasn’t been done before.

“I start out by making the beat of the song, usually sampling old vinyls by chopping pieces of the song and putting them in my MPD218. After I finish the beat, I write the lyrics and record it, then I send it to my mixer and he mixes and masters my vocals,” Gilbert said.

Kofi Agyeman is another student who started making music as a hobby. He has always enjoyed putting together rhythms and melodies in his head and started playing piano when he was eleven. His process is a little different from Gilbert’s, but can still be quite time consuming.

“It starts off with an idea, that’s 90 percent of it. I go into most songs having a loose idea of what it will sound like, but it oftens evolves into something more over time. Since I started out making beats at first, I often hear a melody before words. If my starting ideas are lyrics, then I pretty much know what the song sounds like. I’m the type of person who enjoys spontaneity within my life. While that approach doesn’t work as well in other places like school, I use it to my advantage when i’m producing and writing songs. I have to be alone when making music, I’m sure there’s some psychology to that, but that’s what allows my mind to flow,” Agyeman said.

While making music can seem intimidating at first, everyone can try it, even with a limited budget. Although you might think every famous artist produces their music in a big, professional studio, complete with a fancy mixing board and a soundproof vocal booth, this isn’t always necessary. Steve Lacy, a Grammy nominated music artist, makes all of his music on his iPhone.

Like Gilbert mentioned earlier, he began making music using Mixcraft 5, which is an easy-to-use online recording studio. Mixcraft allows you to record audio, arrange loops, remix tracks, compose with virtual instruments, score and edit video, and add effects to create your unique composition. Another option is GarageBand, which is used by Lacy. Although a seemingly simple interface, if you’re creative enough, your options are endless.

According to Spotify, there are over 1,000 music genres in the world. This means that if you’re interested in making music, you can choose from a variety of genres and see which one you like the most. For example, if your favorite genre of music is pop, you might enjoy making pop music because you’d be the most familiar with it. Also, don’t be afraid to blend several genres together.

“(My music) is a fusion of psychedelic rock and other stuff like grunge, punk and funk, but with a pop and rap twist…I started playing guitar in March, so my songs have become more guitar oriented, but i’ll always include many types of music to my sound. I think it’s important that there are dimensions to it. It’s the only way to grow musically,” Agyeman said.

Both Gilbert and Agyeman are interested in continuing their music career when they get older and have already released some songs. Gilbert’s album, “Devil’s Thoughts,” is available to listen on Spotify, Youtube, and Apple Music. It’s a blend of old and new school lyrical hip-hop. Agyeman has released several songs on Soundcloud under the username @ roman shampane. He’s also looking forward to releasing new music in 2021 to show his growth as an artist.