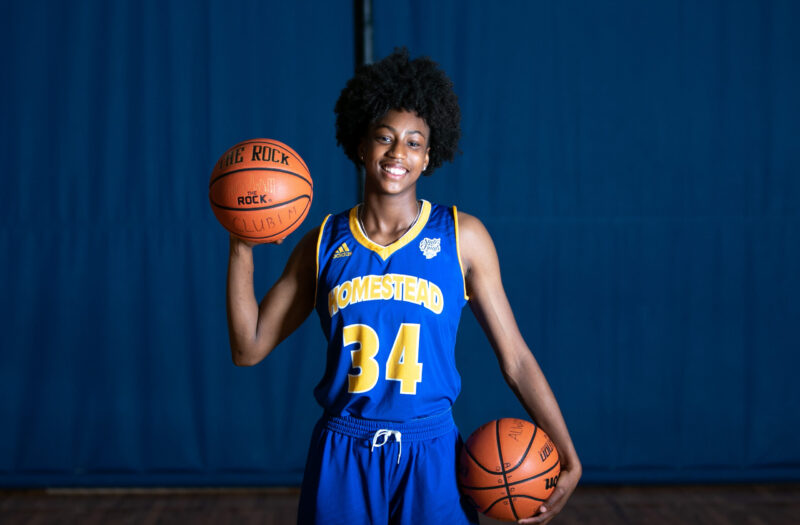 Anyone who frequents their Twitter timeline, or at least did so in the beginning of this school year, should recognize the name of Ayanna Patterson, as a video posted by the Homestead basketball player went viral in September. If you aren’t aware, the 6’3” junior possesses a skill that is advantageous for a professional athlete, but practically unheard of on the high school court: the dunk.

Not only has the video given Patterson an extraordinary amount of recognition locally and nationally, but it has also helped to brighten her future at Homestead and post-graduation.

While she’s grateful and proud of her recognition, Patterson (11) has her eyes set on the future, and the future has set its eyes on her: Several of the nation’s leading athletic universities have extended offers of recruitment. Among these schools are the University of Connecticut, Notre Dame, Clemson, Baylor, and Mississippi State.

“I was happy with the recognition I received from my dunking, since it was my first time going viral,” Patterson said.

The video, captioned with three excited emojis, garnered over 36,000 views and 150 retweets. Unfortunately, neither the SACS district nor Homestead recognized Patterson’s athletic achievements, online or not.

“It hurt a little that SACS and Homestead did not give any attention, but that was not the reason for posting it,” Patterson said. “I posted the video because I wanted to show that girls’ basketball is evolving and growing.”

Although she is not upset at the lack of recognition, Patterson notices the disparity between boys’ and girls’ sports at the high school level.

“In high school there is a really small fan base in comparison to boys’ basketball, who bring in large crowds and student sections for playing the same game as the girls,” Patterson said.

“My hope for this season is that we continue to build our team chemistry and win,” Patterson said.

Team is more important than Twitter fame for Patterson, and she’s grateful for the close bonds she’s formed with her teammates.

“My proudest accomplishment so far in my athletic career is building relationships with numerous people though basketball,” Patterson said.

Patterson aspires to achieve big goals in basketball, and she’s looking forward to what the future holds for her.

“I think that my accomplishments put me in a good position for my future,” Patterson said. “I do want to play in the WNBA and play professionally overseas.”