The Art of Diversity 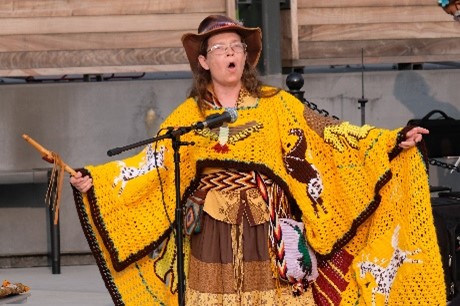 Right now, there’s a lot of frustration in our community that we wouldn’t be experiencing in better times,” Mayor Tom Henry said. “The culture and arts are something of great power in Fort Wayne, and something that we’ve been working very hard to offer in our community to take away people’s angst for just a short period of time.”

In our current world of uncertainty and unrest, it’s easy to feel divided and isolated. For Three Rivers Art Center for Kids (TRACK) founder Terry Doran, however, the present turmoil is a new opportunity for bridging our differences. It was with this goal that Doran founded the RiverDrums Festival five years ago. Each year, RiverDrums showcases the passions and talents of a diverse group of Fort Wayne artists and entertainers.

Doran first started TRACK to transform the lives of abused and marginalized children through the power of music, dance and writing. Doran himself has produced plays and short documentaries such as “Anne Frank and the River Traveler,” “Happy New Year Molly,” “Dreams for Kori” and “Angel Fire.” While filming his “Anne Frank and the River Traveler” documentary in 2014, Doran took a river trip and was impressed by his fellow travelers’ deep appreciation of the river.

After witnessing a moving performance on Native American heritage by a Miami tribe member in 2015, Doran was inspired to create RiverDrums, an event where people from all walks of life could experience diverse heritage and cultural art. In Doran’s words, “art shouldn’t be just for the elite, but a treasure to be shared.”

The RiverDrums Festival is supported and organized by Friends of the Third World, City of Fort Wayne’s Cable Fund Access Board, and individuals like Patty Hunter, host of the “Patty’s Page” talk show. Now more than ever, the spirit of RiverDrums lies in community.

“I am really humbled by the talented people that help me make RiverDrums happen,” Doran said. “All the performers felt that they were helping people to cope with the strain and anxiety of living in such uncertainty.”

The festivities commenced with a proclamation written by Doran and delivered by Mayor Henry: September 14, 2020 is officially RiverDrums Day, in honor of the late “Miss Virginia” Schrantz whose “life serves as a legacy of hope.”

“What do Miss Virginia and RiverDrums have in common? RiverDrums is about helping others, especially during this pandemic, and nobody exemplifies that more than Miss Virginia,” Doran said during the event.

When not working as a nurse, Miss Virginia helped those in need at her home and at her food pantry on South Hanna Street. She was given Washington D.C.’s National Humanitarian Award for her efforts. With Mayor Henry’s decree, the exemplary social work of Miss Virginia and the cultural bridging of RiverDrums were permanently recorded in Fort Wayne history.

“Proclamations are extremely important because they recognize someone who has made Fort Wayne a better place to live,” Mayor Henry said. “Proclamations are actually entered into the (history of the) city of Fort Wayne, so when someone or some group researches our city’s history, they’ll understand why today was so important.”

RiverDrums was highly commended by Mayor Henry for “the diversity that it shares among our city as far as being open to anyone and everyone, and also the quality of life that it adds to our community.”

“Only at RiverDrums will a mayor and a French fur trader be on the same stage,” Doran joked in introducing the fur trader, who welcomed the audience to Kekionga, the name of Fort Wayne’s original settlement.

Over the past decade, flutists Karns and Noland, have performed for the National Public Radio (NPR), Fort Wayne Access TV, and the National Guard.

“A lot of people don’t know the cultures and traditions of the Indians, and I think it is vital for everyone to understand where they came from and what happened to them since they were here first,” Karns said.

In addition to performing on NPR and Fort Wayne Access TV’s “Potpourri” hosted by John Dickmeyer, Karns does school tours in Huntington, Indiana at the forks of the Wabash River. She teaches Huntington students on how to play the different types of flutes. One of her most memorable moments was when a fourth grader requested the Star Wars theme song on flute. With these performances and tours, Karns aspires to create a peaceful and welcoming space.

“(The flute is) very meditative and very soothing, and in these stressful times it really helps to relieve the stress,” Karns said.

While Karns became interested in the flute at a young age through Native American powwows, Noland began playing the flute eight years ago.

“I found my soul, my heart, and my reason in the flute,” Noland said. “After I started (playing the flute) people sent me messages and letters about what the flute does for them, and I knew that’s what I was doing for the rest of my life.”

“(I want to create) unity in people and in art. It bridges differences in languages and cultures to bring people together,” Noland said.

Noland’s desire to bridge differences was reflected in the Hispanic dance group, Amaneceres de México, which was established over two decades ago. Lead dancer Margarita danced as a child in Mexico, and began leading the group about 22 years ago.

“(It is important to share Mexican culture in Fort Wayne) because we have a large Hispanic community here and it’s good to keep our traditions alive – our language and our music,” Margarita said.

All those who organized, supported, and attended RiverDrums were bridged not only by an appreciation of cultural diversity but also by the ultimate goal of unity, which is achieved only by an acceptance and understanding of such differences.

“(RiverDrums) showcases that we are all one people by highlighting the beauty of different cultures through art, the universal language of humanity,” Doran said. “I believe appreciating beauty will ease the fear that leads to hate and violence.”