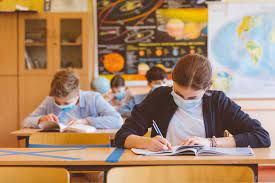 “I have had the unique opportunity to teach in various areas of the United States. I taught in West Virginia, Virginia, Pennsylvania, Connecticut, and now in Indiana” said Nelson.

Nelson believes that it depends on the state to choose how the education system needs to be changed. Nelson thinks that could be anywhere from basic skills like reading and writing to technology skills.

Koelinger thinks that the education system needs to change based on what is happening in society. He realizes that not everyone will go to college, so teachers need to start preparing them to be contributors to society rather than preparing them for college.

“Schools need to continue to find ways to give students skills for after high school that don’t require traditional college” said Koelinger.

Nelson believes that the pandemic has changed the education system for the future. Nelson thinks that it will not change the heart of a true teacher. Nelson believes that a teacher who is passionate about teaching will find a way to reach all students.

Koelinger believes that COVID has changed education for the better. He thinks that more students will opt for a virtual option rather than being in the building.

Shramek believes that the virus has changed the future for education. He thinks that it has caused teachers to deliver the material in a more digital-friendly way. He believes that it could take a turn for the worse.

“… but COVID proved to us that if a teaching becomes too digital, it may actually be bad for some students” said Shramek.

Shramek believes that teachers are already lenient as they are. He thinks that staying lenient to the point where students cannot take advantage of your class is a good place to be.

Koelinger thinks that teaching has changed in many ways. For him, he has to come up with new ways to create labs so that students, both in-person and online, can do the labs. He either has the virtual students do a lab together and the in-person students do labs together or mix them together.

Shramek believes that geometry has changed for the worse since the pandemic. He believes that students think that you don’t need a sheet of paper to work out problems in his class. He wants students to draw out diagrams, which will help them solve and understated the problems better.

“Adapt, change, repeat” said Koelinger. That is the way he described the past year in 3 words. He hit that description spot on. With the one year anniversary of COVID shutting down Homestead just past, we all had to learn how to adapt, change, and repeat. Education has changed forever since the pandemic hit. Now all we can do is wonder what would have happened if the pandemic didn’t happen.