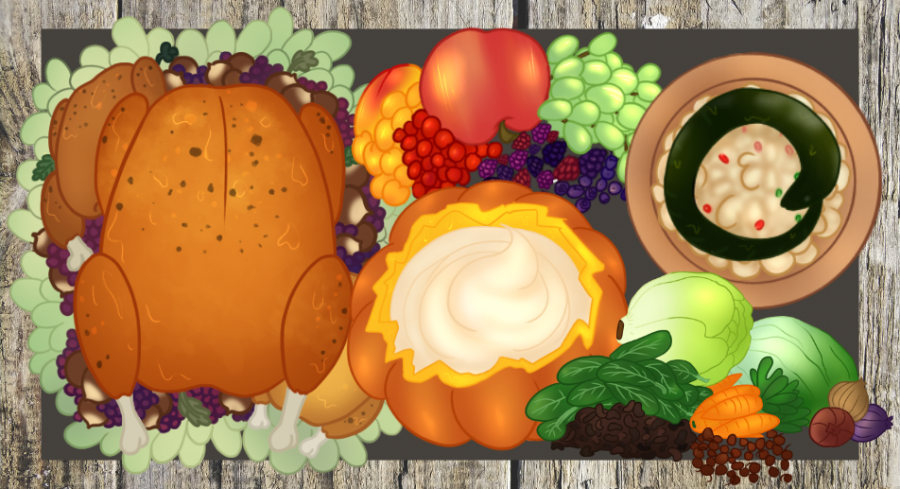 What’s On the Table?

Everyone knows the Thanksgiving classics- corn, rolls, turkey, cranberry sauce- the list goes on and on. But are these really the foods that the Pilgrims and Wampanoag had at the legendary “First Thanksgiving Feast”?  Here’s what was on the first Thanksgiving table!

While the Pilgrims did bring turkey to the feast, it was wild turkey, not domesticated. Additionally, there was nothing special about this turkey. It was actually one of many birds they likely caught, including geese, ducks, and swans. And that delicious stuffing we associate with turkey? There wasn’t any bread-based stuffing at the feast. Instead the Pilgrims would’ve used herbs, onions, or nuts for extra flavoring.

The Pilgrims and Wampanoag ate a variety of vegetables from the area, including onions, beans, lettuce, spinach, cabbage, carrots, and peas. Traditional corn wasn’t served, instead being used to make cornmeal, the basis for the porridge the Pilgrims would’ve made. Additionally, there were no potatoes. Potatoes hadn’t yet been introduced to North America and were just starting to make their way back to Europe, so neither the Pilgrims nor the Wampanoag would’ve had any!

Without sugar, it’s easy to see that the Pilgrims and Wampanoag didn’t have traditional pumpkin pie. They didn’t even have flour or butter to make the crust, or even an oven to bake it in! However, they did have a pumpkin-based dish. The Pilgrims likely hollowed out pumpkins and filled the shells with milk, honey, and spices to make a custard. Then, they would’ve roasted the gourds whole in hot ashes.

There’s one last dish that was served at the First Thanksgiving, and it’s one that we don’t even associate with Thanksgiving today- seafood! Because Plymouth was so near the ocean, there was an abundance of seafood. The Pilgrims served mussels, which were found in plenty on the rocks along the shoreline. Mussels, a type of shellfish, were served with curds, a dairy dish similar to cottage cheese. Besides mussels, there was a ton of other seafood, including lobster, bass, clams, oysters, and even eel. Seafood made up one of the largest portions of the feast, yet we don’t even consider it a Thanksgiving dish today