Voting Rights: Is Democracy in Danger? 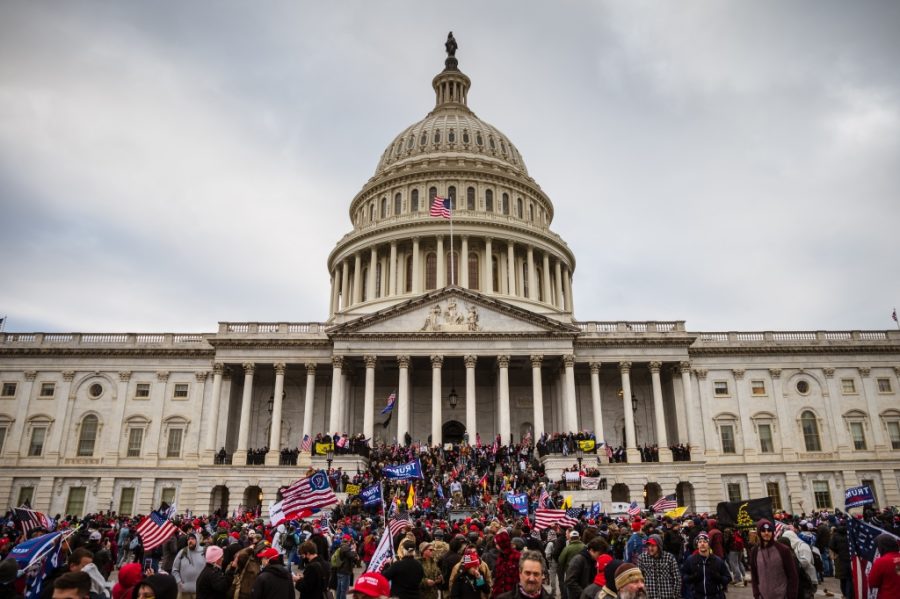 Democracy: the will of the people. One of the fundamental aspects of American democracy is the ability of the people to influence the government by electing officials who will, should, and must represent them. Unfortunately, the right to vote has been restricted and outlawed throughout American history. Even at our nation’s founding, only land-owning white men were allowed to vote. African Americans, time and time again, have had to fight for their right to vote and more, be it during the Civil War, the Civil Rights Movement or Black Lives Matter.
Just two years ago, the 2020 presidential election saw unprecedented turnout, to a level unseen since the 1900s. For the first time since 1992, an incumbent president failed to win a second term. President Joe Biden’s victory was made possible by the high minority turnout. However, many Republican politicians and controlled state governments claimed there was “election fraud.” Republicans also sought to enact policies to “secure election integrity.” Many of these actions would unfairly impact low-income and minority voters, all of whom make up a core voting block for the Democrats and are vital for Democratic election victories. Exit polls from AP VoteCast showed that 91% of African Americans, making up 11% of voters, and 54% of voters making under $50,000, about 38% of voters, supported President Biden. Of course, that is without mentioning the impact of gerrymandering and voter disenfranchisement. Because of these attempts by Republicans to restrict access to voting, Democrats have attempted to pass the For the People Act and the John Lewis Voting Rights Act. Unfortunately, both bills failed in the Senate because of the filibuster. The filibuster is basically a way for Senators in the minority party to block any bills they do not like since it requires 60 votes to overturn a filibuster.
The most critical parts of the John Lewis Voting Rights Act were to expand voter protections, federally review states changing voting laws, and to inform citizens of any changes to voting practices at the state level. The For the People Act would finally end gerrymandering (redistricting districts to favor one political party over the other), reform campaign finance laws, make it easier to vote and generally, improve American democracy. Additionally, there is also the Freedom to Vote Act, a more moderate form of the For the People Act created after the For the People Act failed to pass the Senate.
American democracy as a whole is in danger. Alas, the Freedom to Vote Act is not expected to pass the Senate either. A moment where a significant portion of the American population believes a free and fair election was stolen. Republicans make up about 40% of the US population with 66% believing the election was stolen according to a Washington Post-University of Maryland. In total, that would mean there are 85 million Americans who believe former President Trump won the 2020 election. The same people who also believe it is perfectly acceptable to storm the heart of American democracy:
the Capitol building. 66% of Republicans believe that the January 6 Capitol riot was not an attack on American democracy while 77% don’t hold Trump responsible for the riots based on a poll published by Quinnipiac University. The right to vote needs to be protected. Protecting voting rights shouldn’t be seen as a controversial opinion, but it is certainly a divisive topic among Republicans. As seen in a poll from the Data for Progress, Democrats support the Freedom to Vote Act by a +79 margin (85%-6%) with Republicans by only at a +23 margin (54%-31%).
I wholeheartedly support both the John Lewis Voting Rights Act, the For the People Act, and other attempts to expand democracy. American democracy will continue to wither away unless action is taken by the people who are supposed to represent us. We are seeing increasing divides, partisanship, violence and authoritarianism across this country.
If the right to vote cannot even be protected, then can the United State even be considered a country that represents the will of the people? Does your vote matter? Can change be achieved? I’m certainly worried about the future of America, as all people across the political spectrum should be. Still, I have hope that change can happen. Slowly, we can achieve progress so that the United States can truly be considered a democracy. A place where the will of the people matters -even Homestead students that are concerned about voting rights and the future of American democracy as a whole.

In the past few years, the United States has seen a heightened interest in election law, culminating in Democrats’ proposal of the Freedom to Vote Act. The Freedom to Vote Act is predicated on the idea that state laws are making it difficult to vote in elections. However, states are actually passing laws that make it easier to vote (in-person) while simultaneously making elections more secure. For example, Georgia’s controversial voting bill actually extended early voting, which many liberal commentators overlooked. So, why are we still trying to pass a bill based on that premise? The answer is simple-Democrats see an opportunity to make it easier to control elections, as well as to make it easier for voter fraud to take place. Let’s go through some of the issues with the Freedom to Vote Act.
First, the bill mandates no-excuse voting by mail for all eligible voters. This means that anyone could vote by mail for any reason, without a verified excuse. It also requires ballots postmarked Election Day to be counted if they arrive within 7 days and requires that votes be counted even if they don’t arrive properly secured. All of these things clearly make voter fraud easier-a ballot could be taken out of the mail, changed and still arrive in time. Any evidence of tampering would of course be ignored because it would be considered a “minor error” and not worthy of discarding the ballot. Additionally, if anyone can use mail-in voting for any reason, someone could falsely request a ballot for someone else and fill it out in their name. The bill’s expansion of mail-in voting would surely see an increase in voter fraud of the type seen in 2020. Yes, there was more voter fraud than usual in 2020. Enough to change the results of the election? Probably not, but enough to consider the role that mail-in voting played in the increased fraud.
The bill would also make ID requirements for voting in-person much less stringent, forcing states to accept even electronic forms of identification. It doesn’t allow states to have stricter ID laws, but does allow them to drop the requirement completely. This should flare warning bells in the minds of everyone reading-voter ID requirements are supported by 80% of Americans according to a June 2021 poll by Monmouth University. When was the last time you can remember 80% of Americans agreeing on anything? Still, Democrats want to pass a bill that flies in the face of public opinion.
The bill would also sweep away state laws that prevent previously incarcerated felons from voting in elections. Allowing them to vote in elections undermines the justice system, which uses the loss of voting rights as a disincentive to commit crimes. Breaking the law has consequences, and it’s ridiculous to remove those consequences.
Finally, and perhaps most troublingly, the new law would drastically alter voting registration. It requires all states to automatically register eligible voters. While this sounds like a good idea, there are many negative consequences-if everyone is automatically registered to vote, it’s much easier for people to fraudulently vote in someone else’s name. By making people register to vote by themselves, it ensures that only those who are planning to vote appear on the voter rolls. It also requires same-day voter registration, which makes it more difficult to verify the identity of someone who shows up to vote unregistered. Finally, it makes it more difficult for states to purge their voter rolls (clearing the voter rolls of people who are deceased, have moved, or are otherwise ineligible to vote), also making it easier for people to commit voter fraud. The Freedom to Vote Act may have some positive pieces (creating verifiable paper records, expanding early voting and making Election Day a public holiday), but the drawbacks far outweigh the benefits.
There’s one last question to ask: why would Democrats want to pass a law that makes voter fraud easier? There are two reasons. First, the federal bill would make cases relating to election law fall under the jurisdiction of the DC court district, which is very left-leaning and filled with liberal judges. Secondly, the Democrat Party is in favor of less restricted borders, which means that they know that large amounts of the illegal immigrants pouring into the country will feel indebted to them. According to a New York Times article from October 2021, a record high 1.7 million illegal migrants were encountered at the border in the past year. It’s important to note that border policy changed when President Biden, a Democrat, took office at the beginning of 2021, which led to the increase in border crossings. By making it easier to vote without identification or by mail, and expanding the number of names on the voter rolls, they provide more opportunities for illegal immigrants to fraudulently vote- votes that will most likely be cast for the party that promises them amnesty and money. The Freedom to Vote Act must be rejected, and the American people must open up their eyes to the danger that elections are in-not from Republican laws that secure elections, but from Democratic laws that will fraudulently slant elections in their favor for years to come.