Spartans Can Win SAC with Win Against Carroll 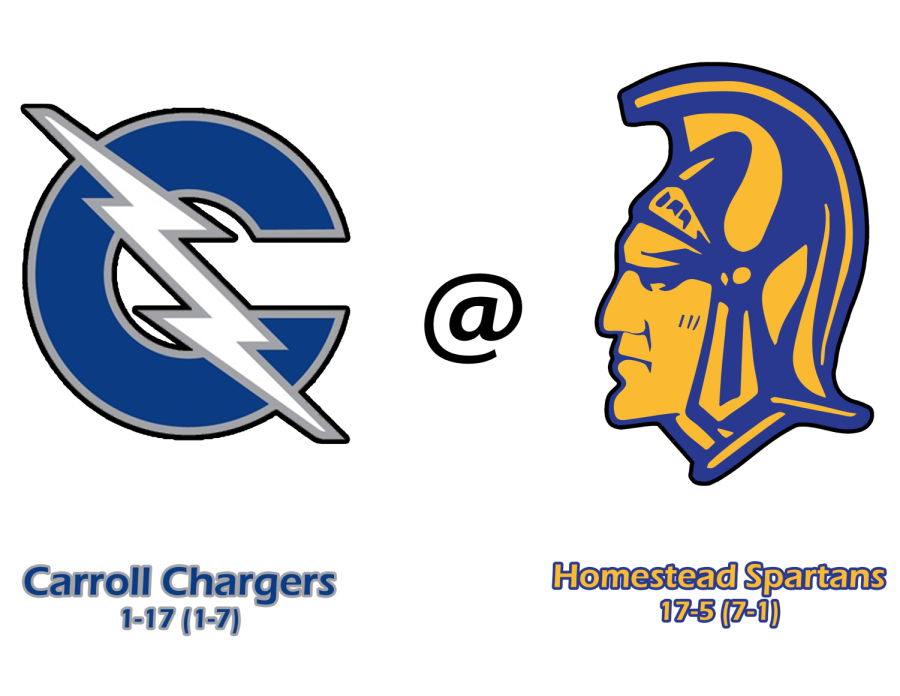 Homestead sits a-top the SAC standings, sitting at 7-1 with a tough road win against Concordia Lutheran last Friday, 49-35. Homestead still managed to pull away with a win without star player, Fletcher Loyer, who was out because of suspension for getting ejected on Wednesday again New Haven. One more win and the Spartans can win the SAC. That win will have to come against “The Team Up North”, Carroll.

Carroll is one of the worst teams this season in the SAC, only having one win on the season, which was against Bishop Luers. Hopefully, it’ll be an easy win for the Spartans and we will win the SAC. But what happened to Carroll?

Last season, Carroll won a sectional title, but this year is a lot different. For starters, the Chargers lost their star player, Jalen Jackson, who transferred to Northrop to play basketball. Last year, Jackson averaged 22.3 PPG and shot 60% from the field. He was leading Carroll to wins, so it was a big loss for them when he transferred.

Second, they’re a very young team. They have a combined 5 juniors and seniors. The rest of the team consists of sophomores and one freshman. They are a young and inexperienced team, and it’s hard to win games with the majority of the team being inexperienced. They’ll be a team to look out for in the future, but for now, nobody really has to worry about them.

For Homestead, getting Loyer back is a huge advantage for us. Most likely, we won’t need much from Loyer to win this game, but having your best player back is always a good thing. Another advantage we have is Carroll on the road. They don’t play great at all on the road, so it’ll give Homestead a big advantage.

It’s all set up for us to win the SAC, but we have to come through. Friday is the biggest game of the year: rivalry game and a SAC title on the line. It all starts at 7:30 pm. Students, the theme is USA. Wear red, white, and blue. BE THERE!!!